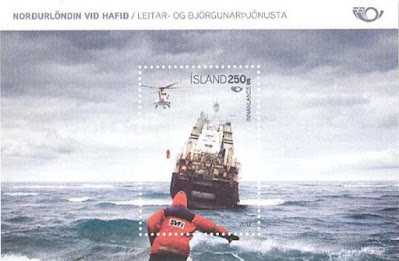 This information is supplied by Iceland Post
Norden by the Sea II – Rescue Service
Search and rescue services constitute the theme of the 2012 Norden stamps.

For centuries, Icelandic fishermen have lived with the dangers of the sea. Many lives have been lost in the struggle with the forces of nature. The Icelandic Coast Guard and Landsbjörg, the Icelandic Association for Search and Rescue (ICE-SAR), cooperate closely in rescue operations when perils threaten at sea or on land. The professionalism of the Icelandic rescue teams have attracted worldwide attention.

The Coast Guard plays a key role in rescue at sea with its powerful helicopters, ships and planes. The Coast Guard has at its disposal two planes, two helicopters and three ships, Ægir, Týr and Þór. The present stamp commemorates the rescue operations of March 9th 2004 when TF Líf, the Coast Guard helicopter, rescued sixteen crew members of the fishing vessel Baldvin Thorsteinsson EA 10. The vessel went ashore in the South of Iceland after it’s capelin net fastened in the propeller. Rescue units from ICE-SAR assisted on land.

The stamp design is based on an award-winning photo by news correspondent Jonas Erlendsson.
Posted by prashant at 6:00 AM