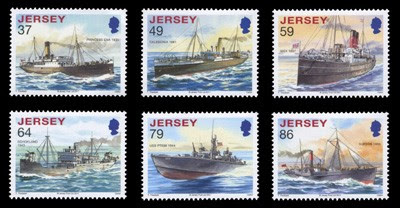 A new set of stamps were issued on Tuesday 12 July showing shipwrecks from and around Jersey.

The six stamps come with a booklet including illustrations and details of what happened to the ships.
The stories are taken from the book Shipwrecks of the Channel Islands.
The ships featured on the stamps are the
TSS Princess Ena ,SS Caledonia , TSS Ibex ,SS Schokland, USS PT509 ,PS Superb and a £3 stamp featuring the TSS Roebuck from 1911. 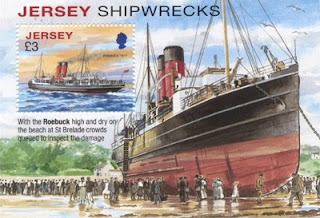 British Elizabethan stamps: The story of the postage stamps of the United Kingdom, Guernsey, Jersey and the Isle of Man, from 1952 to 1970 (Batsford studies in philately)

Posted by prashant at 8:00 PM No comments:

Marking the 100 years of the Royal Australian Navy this 'then and now' stamp issue features the Australian Navy's first flagship, battle cruiser HMAS Australia (I) and modern missile frigate HMAS Sydney (IV).
From settlement in 1788 to 1859, Australia depended on units detached from the Royal Navy based in Sydney to provide naval defence. In 1859, Australia was established as a separate British Naval Station and, until 1913, a squadron of the Royal Navy was maintained in Australian waters. This Australian unit was to be paid for and controlled by the Australian Commonwealth and was to be eventually manned by Australian personnel.
In 1909 discussions held between the British Admiralty and Australian government resulted in the establishment of an Australian Fleet Unit consisting of at least a battle cruiser, three second-class cruisers, six destroyers, three submarines and a number of auxiliaries. The ﬁrst units of this Navy, the destroyers HMA Yarra and Parramatta, reached Australian waters in November 1910 and in the following year on 10 July 1911, His Majesty King George V granted the title of "Royal Australian Navy" to the Commonwealth Naval Forces. On the 4 October 1913, the Australian Fleet entered Sydney Harbour for the ﬁ rst time and in October of the same year formal control of these units passed to the Commonwealth Naval Board, thus ending direct Imperial control.
AUSPOST.COM.AU
The Greatest U.S. Navy Stories Ever Told: Unforgettable Stories of Courage, Honor, and Sacrifice

Six Frigates: The Epic History of the Founding of the U.S. Navy

Posted by prashant at 5:58 AM No comments:

Many Many thanks to Mr Wolfgang Beyer from Germany for sending me a lot of postal covers with Ship stamps and Ship postmark. Will shortly be sharing the scan copies of the same.
I know there has been a delay from my side in sending you the covers/stamps .Will be sending you covers shortly.
THANKS FOR THE COVERS
Posted by prashant at 8:56 PM No comments: