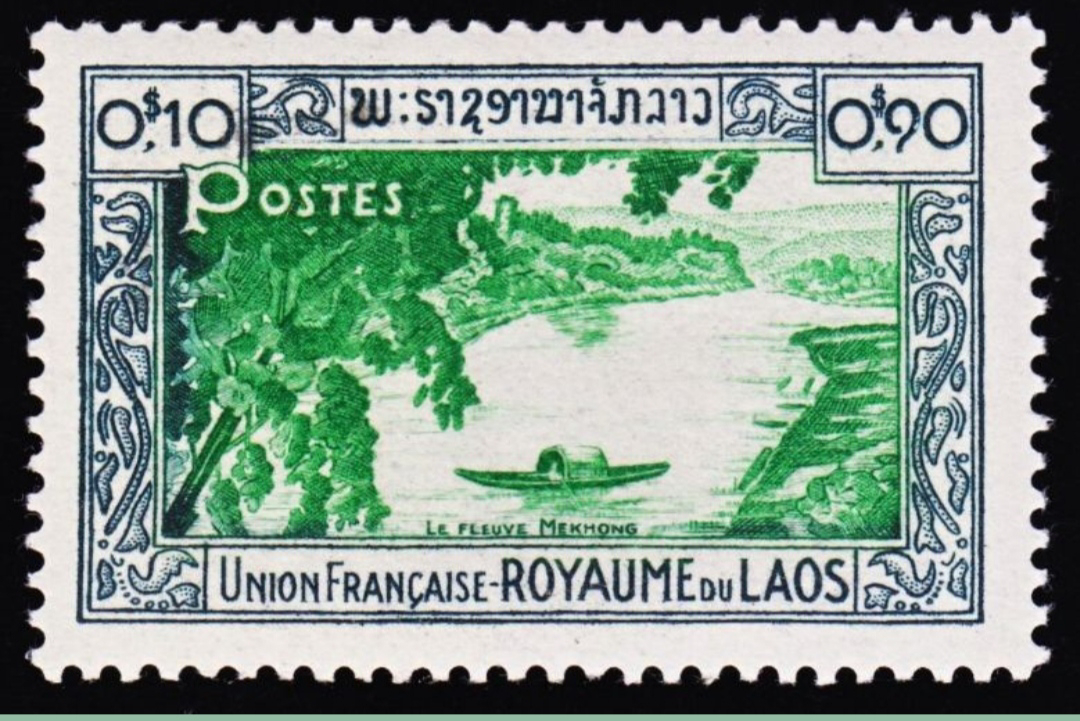 The Himalayas is the source of many rivers like Ganga, Sindhu, Yamuna, Brahmaputra, etc. But Mekong river is longer and massive than all of them, which is a lifeline of South East Asia.
Mekong river originates in Tibet and runs through six countries (China, Myanmar, Laos, Thailand, Cambodia, Vietnam) in  South-East-Asia.
"Mekong" is derived from "Me Kongkea" which means "Ma Ganga" (Mother Ganga) in the Khmer language. Mekong started as Mother Ganga has the deep Indian influences and spiritual connections.
Stamp Info :
Mekong River – Photo by Agence Économique du Gouvernement de l’Indochine – Engraver: Paul Dufresne
Michel 1-3.
Laos:
Laos is a landlocked country in Southeast Asia, bordered by Burma, the People's Republic of China, Vietnam, Cambodia and Thailand.

From the mid 19th to the mid 20th century, the French controlled the Indochina area, which included Laos, although the French regime allowed Laos an internal autonomy and so the Royal family continued their rule over Laos, albeit with restricted power. In 1950, Laos, headed by King Sisavang Vong, was declared independent constitutional monarchy but under the French Union. In November 9, 1953, Laos gained its full independence and the monarchy survived until December 1975 when its last King, Savang Vatthana, surrendered the throne to the Pathet Lao, a Laotian anti-Royal guerilla force, in favor of a communist state called the Lao People's Democratic Republic (Lao PDR) which has controlled Laos since.

On November 13, 1951, the first set of stamps bearing the inscription "Union Française" (French Union) and "Royaume du Laos" (Kingdom of Laos) was issued by Laos, to replace the more general Indo-China stamps which had been in use for years. Since then, more than 400 stamps were issued by the Kingdom, most of them beautifully designed and engraved, mostly by French artists like Marc Leguay and Chamnane Prisayane.
Posted by prashant at 7:42 PM No comments: