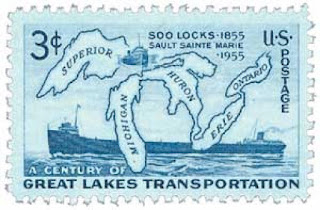 On June 18, 1855, the first ship passed through the Soo Locks, which are also known as the St. Mary’s Falls Canal.

For many years, the people of Michigan suggested that the government build a canal and locks at Sault Ste. Marie.  The only water connection between Lake Superior and the lower Great Lakes was the St. Mary’s River, but a rapids on the river made passage impossible.  Ships were unable to navigate the 21-foot drop at St. Mary’s Rapids, where Lake Superior flows into the lower Great Lakes.

Some opposed the idea, including one senator from the South who said, the area was “beyond the remotest settlement of the United States,” and that it would be like placing the canal on the moon.  In the mid-1840s, however, the tide began to turn.  Copper and iron ore were discovered in the western Upper Peninsula.  Transporting the minerals to Cleveland and Detroit was time-consuming and costly – they had to be removed from the boats and carried around the rapids.

The locks were completed in May 1855 and on June 18, the Illinois became the first boat to pass through them.  The process took less than an hour.  The new system included two 350-foot locks connected to a one-mile canal.  Boats passing through were required to pay a toll of 4¢ per ton.  That first summer alone, nearly 1,500 tons of iron ore was transported through the locks.  Five years later, that number increased to 120,000 tons.

By 1881, the passage had become so important to American and Canadian trade, it needed to be expanded.  The locks were turned over to the US Government and have since been improved and maintained by the Army Corps of Engineers.  Today there are four locks, and an average of 10,000 ships pass through them each year – making them one of the world’s busiest locks.

I have the stamp and cover with the stamp ..The details have been taken from the website :https://www.mysticstamp.com/Products/United-States/1069/USA/

Posted by prashant at 7:21 PM No comments:

Port of Haifa illustrated on the 1.00 Israeli Pound stamp 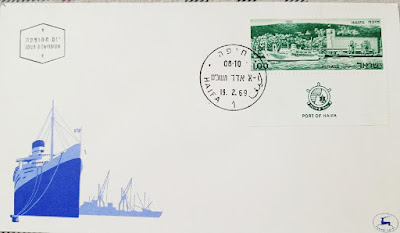 Dagon (Grain) Silo at the port of Haifa, illustrated on the 1.00 Israeli Pound  stamp in the Ports of Israel series designed by Oswald Adler and issued 19 February 1969

The Port of Haifa (Hebrew: נמל חיפה) is the largest of Israel's three major international seaports, the others being the Port of Ashdod, and the Port of Eilat. It has a natural deep-water harbor, which operates all year long, and serves both passenger and merchant ships. It is one of the largest ports in the eastern Mediterranean in terms of freight volume and handles about 30 million tons of cargo per year (not including Israel Shipyards' port). The port employs over 1,000 people, rising to 5,000 when cruise ships dock in Haifa.[1] The Port of Haifa lies to the north of Haifa's downtown quarter on the Mediterranean, and stretches to some three kilometres along the city's central shore with activities ranging from military, industrial and commercial next to a nowadays-smaller passenger cruising facility.

The Haifa Port Company is responsible for most cargo operations in Haifa Port – a natural deep-water harbour – which had been established in 1933.  Haifa’s port is situated on the southern shore of Haifa Bay, 90 km north of Tel Aviv.  It handled some 28 million tons of cargo during 2016; including 1.26 million TEU’s of container traffic (TEU stands for Twenty-Foot Equivalent Unit which is used to measure a ship’s cargo carrying capacity, and is equivalent to the dimensions of a standard 20 feet x 8 feet shipping container).

Haifa can handle vacation cruises – departing and terminating – both for Israelis and for tourists arriving in Israel. In coming years the central area of the port bordering on Haifa city centre – Palmer Gate – will be transformed little by little into a public waterfront open for leisure, cultural events and entertainment.

The area near the terminal also offers excellent public transit connections for passengers. The Haifa Center Railway Station is adjacent to the terminal and is served by nearly 200 passenger trains 24 hours a day on weekdays to the Haifa region and beyond. Additional public transit connections are available by bus or taxi at the railway station or on Ha'Atsma'ut Road, the main thoroughfare in downtown Haifa which is located in front of the station. The Carmelit's Kikar Paris subway station is also within walking distance and allows convenient access to the top of Mount Carmel.

Posted by prashant at 5:57 PM No comments: 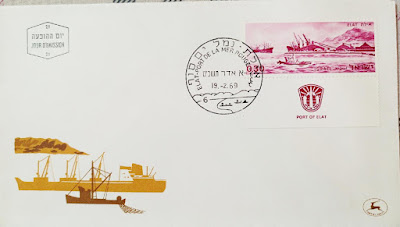 Jaffa, or rather Tel Aviv–Yafo, together with Haifa, Ashdod, Ashkelon, Hadera and Eilat are Israel’s main port cities. Each has featured in one way or another – to a greater or lesser degree – on the country’s postage stamp issue.

Haifa and Ashdod on the Mediterranean, and Eilat in the Gulf of Eilat are the largest of Israel’s international ports. Although not as busy as these three, the Mediterranean port of Ashkelon has emerged as the port handling the largest volume of cargo containers and it is Israel’s sixth largest city.


The Port of Eilat is the only Israeli port on the Red Sea, located at the northern tip of the Gulf of Aqaba.

The Port of Eilat opened in 1955 and is today mainly used for trading with Far East countries. It allows Israeli shipping to reach the Indian Ocean without having to sail through the Suez Canal. Egyptian naval blockades of the Straits of Tiran which control access to Eilat featured prominently in the events which led to two major Arab-Israeli Conflicts: The Sinai War and the Six-Day War.

Ship traffic at Eilat is relatively low (compared to Israel's two large seaports on the Mediterranean). One reason is that Eilat is situated at a considerable distance from the center of the country. Another is the fact that unlike the country's other main seaports, Eilat's is yet to be served by a railway line (the nearest railhead is located over a hundred kilometers to the north at Dimona).

Posted by prashant at 5:35 PM No comments: