In celebrating Guyana’s 50th Republic Anniversary, commemorative stamps and limited-edition gold medallions have been launched for the occasion.

However, in addition to the medallions, the entities launched four national commemorative stamps.

According to Public Telecommunications Minister Cathy Hughes, the theme this year is depicted in the stamps. They are inked with the ceremonial mace, the Floating Production Storage and Offloading (FPSO) vessel Liza Destiny, and Mashramani celebrations among Guyanese. 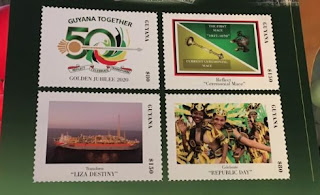 Posted by prashant at 3:06 PM No comments: 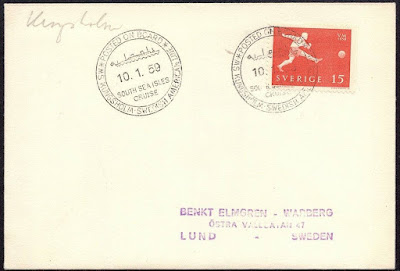 MS Kungsholm was a combined ocean liner / cruise ship built in 1953 by the De Schelde shipyard in Vlissingen, the Netherlands for the Swedish American Line. Between 1965 and 1981 she sailed for the North German Lloyd and their successor Hapag-Lloyd as MS Europa. From 1981 until 1984 she sailed for Costa Cruises as MS Columbus C. She sank in the port of Cadiz, Spain after ramming a breakwater on 29 July 1984. The vessel was refloated later that year, but sent to a Barcelona shipbreaker in 1985 for scrapping.

After the end of World War II the Swedish American Line, the company that had been pioneers of cruising during the 1920s,was left in a difficult situation. MS Stockholm, the large newbuild that had been planned during the late 1930s, never entered service for them because of the war, with the remaining fleet consisting of ageing ships.The company took delivery of their first post-war ship, the fourth MS Stockholm, in 1948. She was a small cargo/passenger liner far removed from the luxury of her pre-war predecessors.

In 1948, during the same year that the Stockholm was delivered, SAL had already begun market research on both sides of the Atlantic, with the prospect of building a new ship in mind. Based on the results of the research, the company decided to order a 20,000 gross register ton combined ocean liner / cruise ship that could accommodate 802 passengers.[1] After contacting 50 shipyards around the world about the prospects of buildings their new ship, SAL placed an order for their new ship with the De Schelde shipyard in The Netherlands on 1 April 1950.

On 18 October 1952 the new ship was launched and christened MS Kungsholm by Princess Sibylla of Sweden.The name "Kungsholm" was a traditional one, having been the name of two previous SAL ships. The newest Kungsholm was delivered to her owners on 30 September 1953.

Posted by prashant at 4:50 PM No comments:

The exact translation from the English slogan would have been “Moenie praat oor skepe nie”. (Thanks Antonio Luis for providing the slogan details)

Check below the slogans used on Posters during the World War II. 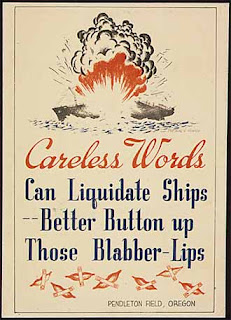 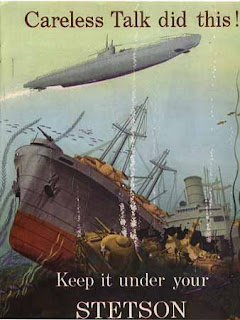 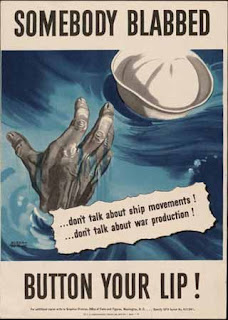 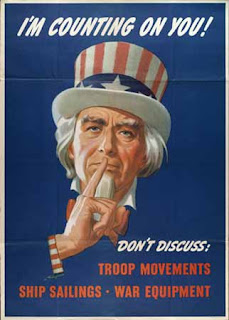 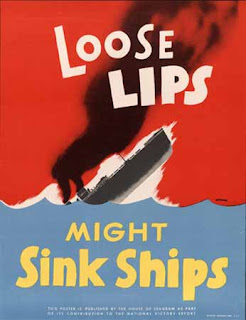 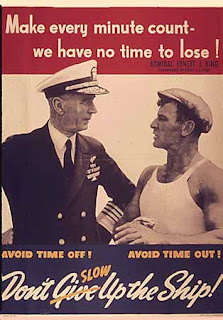 Poster reference : www.usmm.org
Posted by prashant at 1:58 PM No comments: 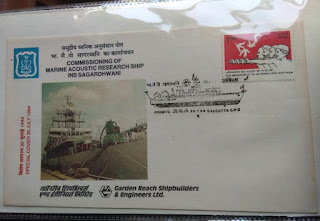 NS Sagardhwani (A74) (Hindi : सागरध्वनि) is a marine acoustic research ship (MARS) owned by the Naval Physical and Oceanographic Laboratory (NPOL), a DRDO laboratory and is maintained and operated by the Indian Navy, and based at Southern Naval Command, Kochi.
The ship was built by Garden Reach Shipbuilders & Engineers, Kolkata, launched in May 1991, and commissioned on 30 July 1994. It is similar in design to the Sandhayak-class survey ships, but with the superstructure positioned amidships and a helipad forward. The vessel is designed to facilitate low noise and low vibration while carrying out acoustic programmes. It has floating floors for scientific laboratories, anti-vibration mountings for machinery and equipment, balloon launching container and wind weather radar to carry out those experiments. It is also equipped with VHF sets, marine radio and auto telephone exchange.
Internally, the ship has eight laboratories for various scientific disciplines, and a mini-operating theater with medical staff. At the stern is handling equipment for mooring and retrieving oceanographic and acoustic buoys. It can accommodate up to 82 persons, including 16 scientists, and a crew of 8 officers and 58 sailors. 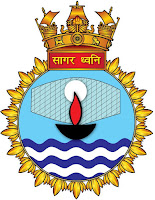 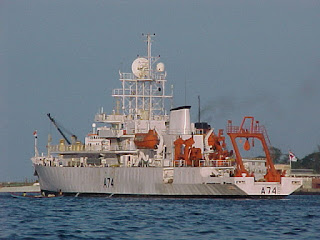 Source: https://en.wikipedia.org/wiki/INS_Sagardhwani_(A74)
Posted by prashant at 4:15 PM No comments: