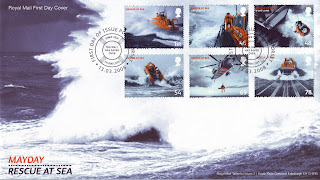 These stamps were issued to celebrate the work of British agencies and organisations that save lives at sea.

To mark the centenary of the SOS signal the horizontal perforations have the SOS dot-dash pattern instead of normal uniform perforations.

Royal Mail marks this centenary with a set of 6 stamps highlighting the actions of the crews of Royal National Lifeboat Institution (RNLI) and the Maritime and Coast Guard Agency (MCA) who regularly risk their own lives attempting to save those of others.

Recently acquired the above FDC ...