What is the Universal Postal Union?

While browsing through various website i got this wonderful detail.Thanks to Tony Servies of Stamps of Distinction for providing the information. 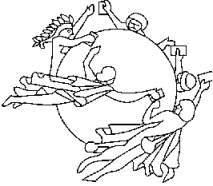 As you advance in the stamp collecting hobby, you will probably run across the organization called the Universal Postal Union, usually abbreviated UPU. What is this organization and what is its purpose?

The UPU was founded in 1874 to help coordinate international postal service. Prior to its founding, each country would have to establish treaties with countries to set postal rates and to dictate the terms of delivery. Seeing that this was increasingly becoming too untenable, the General Postal Union was founded by Heinrich von Stephan of Germany. Four years later, the name was changed to the Universal Postal Union, which has been used ever since.

The UPU stays out of domestic postal issues; it only serves to address international postal concerns.
The most notable accomplishment of the Universal Postal Union was to permit postal fees for international mail to be paid with postage from the originating country. Prior to this, postage would have to be applied for every country in which the item passed. Now, only the sending country gets the postal fees and any imbalances are reconciled at a later time based on the total weight of international mail entering and leaving a country. This step greatly popularized and enhanced the use of international mail.

The UPU also manages the International Reply Coupon (IRC) system. These coupons are treated like currency, although the receiving country will pay out the value in stamps. This is done so that a person in one country can effectively send postage so that the recipient in another country can reply using their native postage.
Because of its close ties with the postal community, many stamps have been issued in commemoration of the UPU. The UPU emblem, shown above, can be occasionally seen on commemorative stamps when the UPU is being honored. The emblem is a depiction of the earth encircled by 5 messengers exchanging mail. The 5 messengers symbolize the 5 continental land masses of the earth (Europe and Asia being combined). The symbol was adopted from the bronze and granite statue created by French sculptor René de Saint-Marceaux.

Of special interest to stamp collectors is the World Association for the Development of Philately (WADP), a UPU-sponsored forum for philatelic groups. One of its main goals is to transmit information about unauthorized stamp issues to the world's postal authorities and consumers. To this end, it has created the WADP Numbering Systems (WNS) which, since 2002, attempts to identify and number valid stamps that have been issued by postal member nations. The internet address for the WNS is http://www.wnsstamps.ch/, which is a helpful site to browse when searching for modern issues. Because it has only been in existence for a few years, the database of stamps is small, but it will continue to collect and post new issues.

The UPU is headquartered in Berne, Switzerland and currently serves 191 member nations. Following the creation of the United Nations, the UPU was established as a agency of that body.
Now whenever you see the UPU symbol on some of your stamps, you will know a little about the background of this organization.
UPU Website : http://www.upu.int/
Posted by prashant at 1:02 AM