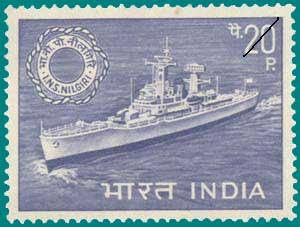 Issued in 15th Dec 1968 to commemorate Navy Day, the stamp depicts INS Nilgiri, the first indigenously built frigate of the Indian Navy.
The Nilgiri class frigates of the Indian Navy are updated versions of the Leander class, designed and built for the Indian Navy by Mazagon Dock Limited in Mumbai. Six ships have been built between 1972-81. The last two vessels (F41, F42) have more powerful engines than the remainder. Vessels of the class form the 14th Frigate Squadron. The Nilgiri class and its lead ship, INS Nilgiri are all named for the Nilgiri Hills. Subsequent ships of the class are also named for hill ranges of India. The Nilgiri class will be decommissioned by the Navy. Four ships from the class have been decommissioned, with the remainder being used primarily for training and testing roles. These will be decommissioned by 2009-10, once the Shivalik class vessels enter service.
Commissioned : 23rd June 1972
Decommissioned : 1996
Sunk on 24 April 1997, by a Sea Eagle AShM fired from a Sea Harrier Frs Mk.51 of the Indian Navy from INS Viraat.
**If anybody has spare stamp,will be interested in exchange**
Posted by prashant at 2:50 AM