1914 WWI censored cover to SWEDEN. Which missed the ship! 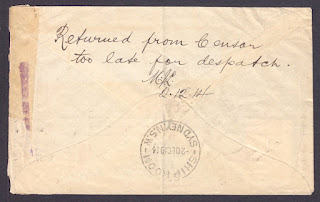 Saw one interesting cover in one of the blogs , thought of sharing here the same...

Roo 2½d on 1914 WWI censored cover to SWEDEN. Which missed the ship!

Clean and fresh and attractive – especially for well over 100 years old.

Marked as Per ‘R.M.S. Mongolia’, and neat typed address to a Timber merchant, in small town Sundsvall in central Sweden.

Stamp is in SUPERB condition or wartime travel of 10,000 miles, – clean and well centred, with clear Sydney machine cancel of December 1, 1914.

‘OPENED BY CENSOR’ tape and a handwritten note on reverse, ‘retuned from Censor too late for dispatch’ with Sydney Ship Room cds on back of 2 DEC -14.

Commercial Mail from here to anywhere except UK and USA and NZ (or Switzerland for the huge amount of Red Cross mail) in WWI is scarce. To SWEDEN .. nearly unheard of.

Posted by prashant at 8:13 PM No comments: Email ThisBlogThis!Share to TwitterShare to FacebookShare to Pinterest
Labels: Maritime 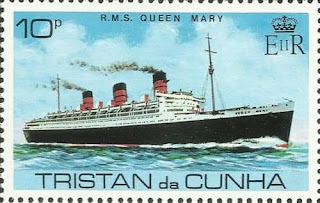 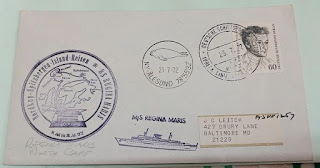 The Regina Maris is a former cruise ship of the Lübeck -based shipping company Lübeck Linie , which entered service in 1966. The ship was sold in 1976, but was rebuilt from 1980 to 1982 under the old name for the Peter Deilmann shipping company . The Regina Maris was the first cruise ship built in Germany after 1939 .
In 1985 the ship was converted into a mega yacht and has been sailing as the Alexander ever since
Posted by prashant at 4:31 PM No comments:

Special cover and cancellation on “Tin Can Mail Experiment” - GOAPEX 2021. 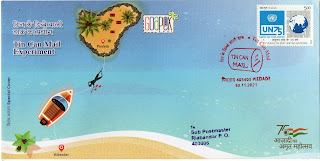 A Special cover with Special cancellation on “Tin Can Mail Experiment”. GOAPEX 2021.

The following was released on occasion.

4. A Special cover with Special cancellation on “Tin Can Mail Experiment”.

In the early part of the 20th century, philatelists began seeking out postal cancellations from Niuafo'ou, a volcanic Tongan island. Since Niuafo'ou lacked a deep water harbor to accommodate ships, postal deliveries were received via the so-called "Tin Can Mail" system of having mail thrown overboard in biscuit tins and retrieved by local swimmers. To swim mail out, Tongans adopted the traditional fishing technique of using a buoyancy pole, called a fau, to swim out with a biscuit or kerosene tin to visiting ships. Using the pole for support the swim could take several hours.

Goa Philatelic and numismatic society, Goa being the proponent.  Tin Can Mail Experiment was carried out with the assistance of the River Navigation Department of Goa.

Posted by prashant at 5:57 PM No comments: