India, a sheet with two stamps, a joint issue of India and South Korea. A queen and a princess are shown with a magnificent ship. 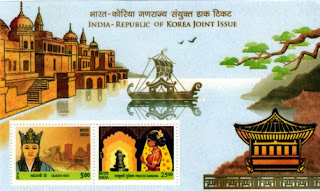 Bilateral consular relations between India and Republic of Korea (RoK) were established in 1962. In 1973, relations were upgraded to Ambassador-level (also with Pyongyang). Consistent Indian support for peaceful reunification of the two Koreas has been well received in this country. •

However, historical and cultural contacts between the two peoples date back to ancient times. According to “Samguk Yusa” or “The Heritage History of the Three Kingdoms” written in the 13th century, a Princess from Ayodhya (Suriratna) came to Korea, married King Kim–Suro, and became Queen Hur Hwang–ok in the year 48 AD. Queen Heo, then 16 years old, sailed across the ocean under the orders of the king of the “Ayuta” kingdom on a vessel that carried the Pasa Stone Pagoda, which was said to have calmed the high seas. She thus became the first woman to ever immigrate to Korea. After the royal wedding, the queen bore her king 10 sons and two daughters. Of the 10 sons, two took their mother’s surname and became the progenitors of the Gimhae Heo clan. The Pasa Stone Pagoda that the queen brought to Korea was kept at Hogyesa Temple until the late Joseon Dynasty, at which time it was moved to the Tomb of Queen Heo. The pagoda currently sits inside a dedicated pavilion at the tomb and is preserved in excellent condition. Korean Buddhist Monk Hyecho (혜초, 704-787 CE) or Hong Jiao visited India from 723 to 729 AD. His travelogue “Pilgrimage to the five kingdoms of India” gives a vivid account of Indian culture, politics & society, including food habits, languages and climate.

The rationale for a close relationship between India and RoK has been reinforced in modern times by political and economic imperatives. The experience of colonial rule and the anti-colonial movements in both countries revived interest in each other. Nobel Laureate Rabindranath Tagore composed a short but evocative poem – ‘Lamp of the East’ – in 1929 about Korea’s glorious past and its promising bright future. He wrote: “In the golden age of Asia Korea was one of its lamp bearers, And that lamp is waiting to be lit once again For the illumination of the East.”

India played an important and positive role in Korean affairs after Korea’s independence in 1945. Mr K P S Menon of India was the Chairman of the 9-member UN Commission set up in 1947 to hold elections in Korea. The successful general elections held for the first time in the South in 1948, led to the establishment of the Republic of Korea on 15 August 1948.

In recent years, India – Republic of Korea (RoK) relations have made great strides and have become truly multidimensional, spurred by a significant convergence of interests, mutual goodwill and high level exchanges. In 2015, the relationship between both the countries were upgraded to “Special Strategic Partnership”. The areas of cooperation between the two countries span areas as diverse as Trade, Commerce, Defence, Science & Technology, Culture, People-to-People exchanges etc.

• Text : Based on the information received from Ministry of External Affairs, Government of India.
*Source : https://www.istampgallery.com/india-republic-of-korea-joint-issue/
Posted by prashant at 5:30 PM

Get latest updates of Blog on E-mail