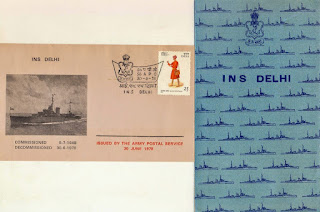 Issued by Army postal service on 30 June 1978
Acquired the beautiful cover with the Brochure.

The ship was commissioned into the Royal Indian Navy as HMIS Delhi on 5 July 1948 under the command of Captain H. N. S. Brown of the Royal Navy.[4] Captain Brown was also serving as Commodore Commanding Indian Naval Squadron (COMINS). She had 17 British officers and petty officers, the rest of the crew being Indian. Commander Ram Dass Katari was her executive officer and the senior-most Indian officer, while Lieutenant Sardarilal Mathradas Nanda was her first lieutenant. HMIS Delhi arrived at Bombay on 16 September 1948.[4] She conducted her first major goodwill cruise in 1948, to East Africa, the Seychelles, and Mauritius.
After India became a Republic in January 1950, she was renamed INS Delhi. In June 1950, Commander Adhar Kumar Chatterji (later Chief of the Naval Staff) became her first Indian commanding officer; the same month she conveyed Prime Minister Jawaharlal Nehru to Indonesia on an official visit. In 1951 her first lieutenant was JB Simmons and she sailed to Africa and Madagascar, showing the flag for the first time since Independence. In 1953 she took part in the Fleet Review to celebrate the Coronation of Queen Elizabeth II.[5]
In 1956, she played herself, as Achilles, in the film Battle of the River Plate. In 1958 she was moved to a training role.

On 18 December 1961, during the annexation of the Portuguese State of India, also known as "Operation Vijay" or the Portuguese-Indian War, in which the state of Goa and its dependencies of Daman and Diu were annexed, Delhi was tasked to patrol the waters off Diu.[6] At dawn, the ship was spotted by the Portuguese defenders, but they did not recognize its hoisted battle flag. The Portuguese land based artillery did not open fire considering it might be a cargo vessel. Indian Navy reports state that Delhi supported the Indian Army's advance by firing on the citadel, and neutralizing the airport control tower. The detailed Portuguese reports on the invasion do not mention fire from the main 6-inch (150 mm) guns of the Indian cruiser,[7] though a possible cause of the discrepancy is that the source of the fire from the ageing cruiser may not have been identified, due to the Indian Army firing from the landward side. Alternatively, the cruiser's shells may have fallen short of the citadel.
The only documented event of naval action between India and Portugal in Portuguese reports in the Diu region, was the sinking of the Portuguese patrol boat NRP Vega by Indian Air Force aircraft, after Vega opened fire on them with its sole Oerlikon 20 mm cannon. After the sinking of Vega the crew was taken prisoner-of-war on the shore.

In 1969, Delhi visited New Zealand under Vice Admiral Barbosa. The visit was the occasion of many reunions of Achilles veterans who were plied with large quantities of rum and beer, and taken on a quick trip by the ship.

Delhi was decommissioned at Bombay in 1978. Subsequently, one of her gun turrets was sent to New Zealand, where it is preserved. A second turret, or gun, is reported to be preserved at the Regiment of Artillery Museum Nashik. The precise fate of the third turret is unknown, but a persistent rumour holds that it was officially recorded as "eaten by white ants".[8] The remainder of the ship was scrapped. The main mast serves as the quarterdeck through which cadets from the National Defence Academy of India pass out.
Posted by prashant at 5:56 PM

This was a nice article on this impressive ship. It was good that India was able to make use of the ship for so long. The lack of armored hulls and large cannon on modern ships may haunt if a future naval battle does not just consist of missiles fired from 50 miles away.

Get latest updates of Blog on E-mail